We officially released beta to the Kickstarter supporters, so far we have more than 28 installs. A couple of users have reported that they love the app. We’re excited about a successful beta launch.

if the beta of the @freedcamp mobile app is just that, the final version is gonna be 💯

We have a few users who missed our Kickstarter campaign but still want to contribute and have access to mobile app right now:

I’m very excited to have found you. I’m disappointed that I didn’t find Freedcamp sooner so as to have contributed to the Kickstarter. Is there any other way to get added to the list to receive the Beta version of the iOS app? I’m very anxious to have that, as well.

You can still get involved with supporting Freedcamp. Please email help@freedcamp.com for details.

There are still a few issues that we’re working on, but with the next few releases we hope to have a stable version.

New onboarding workflows are close, but still a couple small items to be added.

We’ve had a product designer from Facebook look at the app today and have some new larger improvements we should make after we officially launch app.

Depending on speed of mobile team we are confident we can release the app to everyone by mid May at latest. With luck May 1st. 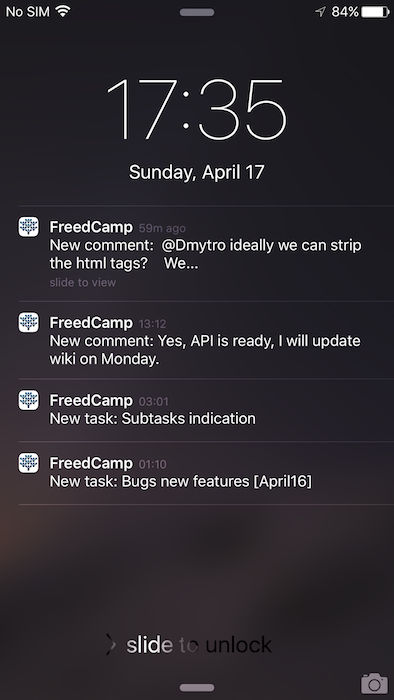 We are doing two types of tests before official launch:

1. Find an existing active user of the system, and watch them login to app and start using it. Help resolve any workflow issues that type of user would have.
2. Get a user, who has never used Freedcamp become to get app and start using it for real in a real life project. Watch initial setup, then get feedback from them as they use it.

We want to make sure both of these types of users have a successful experience using the app.

Update May 31st 2016: We are proud to say that we’ve resolved some major issues in the App, however at this time there are some small issues that are outstanding and we wouldn’t feel right launching the App incomplete. Thank you all for patiently waiting, we are working as hard as we can to make sure we release a great product from day one without any major bugs or workflow issues. Stay tuned as we get ready to launch the application into the app store.