“The Angel of Digital Project Management” – interview with Sara Caputo

Posted on September 3, 2014 by Angel Grablev

Read the Interview of Sara Caputo with our CEO – Angel Grablev in Santa Barbara News. 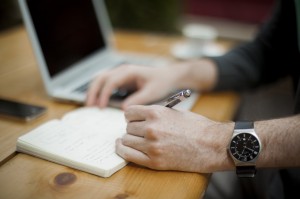 Known for her engaging style and vibrant personality, Sara Caputo, MA, is a dynamic productivity coach, consultant, and trainer based in Santa Barbara, California. She is the founder and principal of RADIANT, a professional organizing and productivity consulting company. Sara is a sought-after speaker, seminar leader and workshop facilitator, and author of the e-book, The Productivity Puzzle: What’s Your Missing Piece?

“It’s fair to say that work and life consist of lists of never ending projects. From the student in school to the CEO of a Fortune 500 company and with every parent balancing the dual job of family and work in between, everyone has countless tasks to complete.  A large portion of my consulting business is advising managers, teams and entrepreneurs on project management systems.  I have learned and used many of these systems and each comes with its own pros and cons.  At the end of the day, finding the right system for your team to hold and carry forth projects in the right way, at the right time for the right people involved can be hard to find.

Wouldn’t it be nice if there were a tool to help you manage all life’s projects, lists, and to-do’s? And wouldn’t it be even better if that tool was free? Well – spoiler alert – there is such a thing and it doesn’t cost a dime.  The tool is Freedcamp, a free project management software program designed to be used by anyone.

Born in Santa Barbara, Freedcamp launched in 2010 and has been growing ever since. On average, about 300 people are signing up on a daily basis. Recently, I sat down and had a chat with local resident Angel Grablev, CEO and creator of the project management software.

The idea behind Freedcamp is that the need for project management is widespread and there are no free quality products for the average person to use. (I don’t think anyone can argue that.) Additionally, competitors such as Basecamp have a program so simple that it lacks the sophistication necessary for a large business to use. Freedcamp was created to satisfy both of these shortcomings.

Freedcamp is an ideal program, because it is completely customizable. It allows the end user to pick and choose which modules to have on their page.  “I felt there needed to be a service that anyone can use, whether it’d be a nonprofit or school or myself,” Angel explained his inspiration behind the up and coming project management software. “So its unlimited users, unlimited projects are all free, and I wanted to create a system that basically allows you to choose how you work instead of it defining how you are going to use it.”

The software has street cred, as in Wall Street, too. Some of the Fortune 500 companies and titans of industry using Freedcamp include such household names as Ford, PayPal, Microsoft, and Nike to name a few. Angel reports that academic heavyweights such as Cambridge, Yale, and Princeton as well as nonprofits like the American Red Cross and the Make A Wish Foundation depend on Freedcamp to make sure nothing gets missed on their lists of never ending projects.

As the uses for Freedcamp are virtually unlimited, there is no one customer profile. It’s truly a people’s, democratic software.  People have told Mr. Grablev that they use Freedcamp in classrooms, organizing nonprofits, family camping trips, and the list goes on.

One particular customer used the software at work and at home. The satisfied user emailed Angel and reported that he started using Freedcamp because they had it at his company and he used it there. Since it was free, he figured he could start using it with his wife for managing grocery lists. So, he and his wife were using it online for that. Then his daughter tells him that she wants to have a turtle. He answers her, “I’m going to make a project so that we can list all the things we need to buy for the turtle, what things you are going to need to do with the turtle when we have it, and everything else that needs to happen before we get the turtle.” The software really helped him communicate to his daughter the commitment level necessary before bringing a pet into the home.

Freedcamp has been featured in the PC Magazine, the industry bible. Other than that, it’s been pretty much word of mouth. “That’s the beauty of creating a great service for free,” Angel explained.  “People love it and you don’t have to do much. I’ve never felt like we need to advertise”.

Who knows? Soon Freedcamp may become a verb in the same way Google has. For example, “She should have ‘freedcamped’ it. The project would have been finished by now.” Or, “First, ‘freedcamp’ it, then everything will fall into place.”

Angel really isn’t concerned about being memorialized through an addition to the English language. “I find my happiness in knowing that others are able to benefit from my legacy,” he noted. “I know I’m going to die one day, and I want to make sure to do something that I know will make the world a better place. That’s kind of an easy motivator for me. ”